SYRIA I am going to choose posts from all ove rthe world and post them; as History is being made and opinions are strong, varied and all count. TODAY from THE WASHINGTON POST 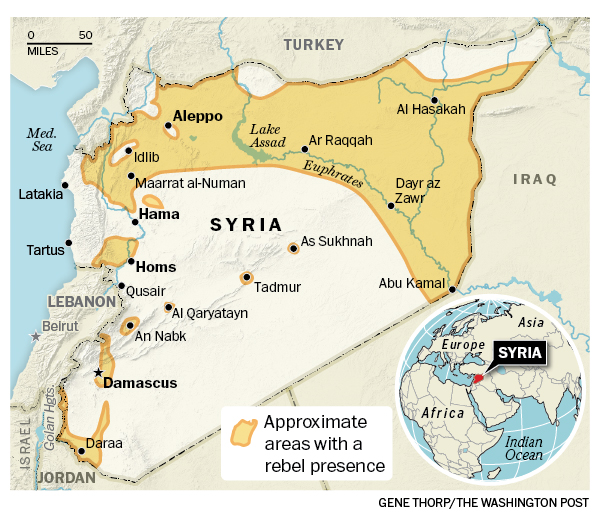 9 questions about Syria you were too embarrassed to ask

By Max Fisher, Published: August 29 at 12:50 pm
The United States and allies are preparing for a possibly imminent series of limited military strikes against Syria, the first direct U.S. intervention in the two-year civil war, in retaliation for President Bashar al-Assad’s suspected use of chemical weapons against civilians.
If you found the above sentence kind of confusing, or aren’t exactly sure why Syria is fighting a civil war, or even where Syria is located, then this is the article for you. What’s happening in Syria is really important, but it can also be confusing and difficult to follow even for those of us glued to it.
Here, then, are the most basic answers to your most basic questions. First, a disclaimer: Syria and its history are really complicated; this is not an exhaustive or definitive account of that entire story, just some background, written so that anyone can understand it.
Read award-winning novelist Teju Cole’s funny and insightful parody of this article, “9 questions about Britain you were too embarrassed to ask
1. What is Syria?
Syria is a country in the Middle East, along the eastern shore of the Mediterranean Sea. It’s about the same size as Washington state with a population a little over three times as large – 22 million.  Syria is very diverse, ethnically and religiously, but most Syrians are ethnic Arab and follow the Sunni branch of Islam. Civilization in Syria goes back thousands of years, but the country as it exists today is very young. Its borders were drawn by European colonial powers in the 1920s.
Syria is in the middle of an extremely violent civil war. Fighting between government forces and rebels has killed more 100,000 and created 2 million refugees, half of them children.