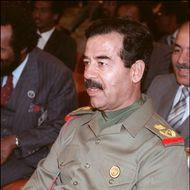 Saddam Hussein in 1987.
The United States appears to be moving closer to taking military action in Syria over President Bashar al-Assad's alleged use of chemical weapons, but a new report in Foreign Policy shows that the U.S. government wasn't always so vehemently opposed to the use of such tactics. According to recently declassified CIA documents and interviews with former intelligence officials, the U.S. government had evidence that Iraq was using chemical weapons in 1983, but concealed those facts as Iran tried to prove that to the United Nations. Even worse, toward the end of the war, the U.S. shared information with Iraq about Iran's military position that it knew was likely to lead to a chemical attack. As Foreign Policy puts it, the new revelations are "tantamount to an official American admission of complicity in some of the most gruesome chemical weapons attacks ever launched."