I’d like to take a moment and step away from historical facts. There is another side to history and myths that often cause conflict in the world of writing. As I’ve already pointed out in my previous post, sometimes history isn't always right and sometimes the facts are not what they seem, and then there is a matter of doctrine. Tossing doctrine into history is whole other can of worms I don’t think that I’m quite ready to tackle, but fiction vs. doctrine is a matter of constant discussion concerning my book, Eternal Curse: Giovanni’s Angel. Below is an small piece I wrote on the matter, which is now published in my ebook, 40 Days and Nights of Eternal Curse. 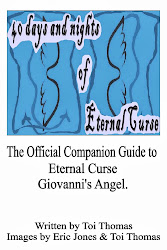 Doctrine is one of those words that you don’t often hear in everyday conversation, but once you’ve heard it used in a sentence you pretty much understand its meaning. Not wanting to take anything for granted, I will put this notion aside briefly to explain what doctrine is. Doctrine is a set of rules and or principles that are taught as part of a belief system, whether it be philosophical, religious, or political.
Fiction isn’t nearly as complicated. For me fiction is anything that the mind can image. There is so much reality surrounding us in modern society that started out as pure fiction in someone’s imagination. Fictions is make-believe, it’s fantasy, it’s what if and how about this. I like to tell fictional stories because it leaves open limitless possibilities. While much fiction is influenced, inspired by, and even derived from factual events, the very nature of the media keeps you from being forced to accept the limitations of reality and facts.
The story of Eternal Curse: Giovanni’s Angel is a fictional story with a basis in one particular religious doctrine. I’m obviously influenced by the things I know and have been exposed to throughout my life. Fiction in story telling is like painting a picture; you can make the picture look however you want, but it may still be interpreted in many different ways.
I hope that those who have an appreciation for Judeo Christian philosophy will not get too bogged down by my lack of detail and accuracy; and will instead just enjoy the story. For those unfamiliar with Judeo Christian philosophy, I suspect they will have no problem just enjoying the story, as long as they don’t read it trying to find something that isn’t there. - Day 38 complete.

40 Days and Night of Eternal Curse is a FREE ebook with promo code GW22H at Smashwords.com until the end of August 2014, however, if you wish to purchase a paperback copy of this book, please click on the following link. *Also, if you’re not Smashwords savvy and would like to purchase a Kindle copy of this book for $1.59, click on the link provided.

With the release of Eternal Curse: Giovanni’s Angel, at least one more update is planned for this ebook. Click the image for an introduction and visit the Eternal Curse Series tab for a description.