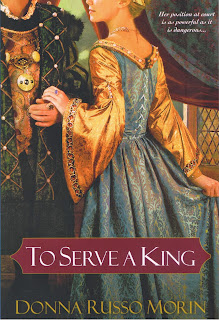 To SERVE A KING
It's Enigmatic King, Royal Mistresses, and Royal Cat Fights

“Russo Morin has created a wonderful heroine and painted a brilliant portrait of a neglected court.” -Publishers Weekly

From her earliest days, Genevieve Gravois has known one fact above all: Francois I, king of France, is her enemy. Raised by her embittered aunt after her parents' deaths, Genevieve hasbeen schooled in things no woman should know: how to decipher codes, how to use a dagger and a bow, and how to kill. For Henry VIII has a destiny in mind for the young girl--as his most powerful and dangerous spy. When the time is ripe, Genevieve enters the magnificent world of the French court. With grace to match her ambition, she becomes maid of honor to Anne de Pisseleau, King Francois's mistress. Yet neither the court--which teems with artistry and enlightenment as well as intrigue--nor Francois himself are at all what Genevieve expected. And with her mission, her life, and the fate of two kingdoms at stake, she will be forced to make deadly decisions about where her heart and her ultimate loyalties lie.

“5 Stars! A fast paced read with a clever and tenacious protagonist, I found it hard to put down! Any fan of historical mysteries will love this exciting read by Donna Russo Morin!” -Passages to the Past

“Well written and intriguing, Morin proves that she is a contender in the wildly popular historical fiction genre.” -Luxury Reading

“In the onslaught of historical fiction novels on the market these days, Ms. Morin’s latest stands out for its individuality and breathtaking detail.” -RomRevToday

The spark of initial inspiration for my third book, To Serve a King, came from the hedonistic and turbulent life of the king of France, François I; the second, from the mistresses who enflamed his court. Two women of great beauty, elegance, intelligence and charm, yet they hated each other with a breathtaking passion and dedicated most of their considerable conniving talents towards harming the other.

Born in 1508, the daughter of a middling nobleman (until his offspring became the king’s mistress, of course), Anne de Pisseleau d’Heilly first appeared at court as a maid to the king’s mother, Louise of Savoy, in 1522, but it was not until François returned from years of imprisonment in Spain that the woman caught the young king’s eye, his lust, and his heart. Francois’s infatuation with Anne consumed him and it wasn’t long afterward that he dismissed Francoise de Foix, his official mistress for a decade—though it would be another two years before Francoise gave up the fight for his affections and left court. Foix had no chance to outshine the woman who would one day be deemed as “the most beautiful among the learned, the most learned among the beautiful.”

From the moment they met, Anne and François became inseparable; she ruled his court and his heart and helped François give birth to the French Renaissance. From the first time Anne entered court on the arm of the charismatic king, she became its queen, if not in truth, then in spirit. She was forever by his side, even at his wife’s coronation. The meek and dowdy Eleanor of Austria, unlike Princess Diana when it came to Camilla, had no choice but to accept her husband’s lifelong mistress.

In opposition to Anne’s brilliance, Diane de Poitier’s beauty was one of refinement and elegance, an understated and haughty beauty of an athletic disposition. The daughter of the Seigneur de Saint Vallier, she was married—at the age of 15—to Louis de Brézé, a grandson to King Charles VII, a man thirty-nine years her senior, a decrepit and grotesque man with a hump. And yet Diane did her duty by him and bore him two children, both daughters, though her heart never truly followed. Any warmth between them froze and cracked like thin brittle ice when, in 1524, her father was accused of treason as an accomplice in the seditious acts of the Duke de Bourbon, accused by Diane’s own husband. Convicted, his head on the chopping block, Diane’s father’s life was spared in the end. Many at the time believed the king’s clemency was awarded in exchange for a night of shared passion with the man’s daughter. Diane had saved her father but anything between her and her now elderly husband withered, much as he was soon to do. After his death in 1531, Diane would forever wear black, in later years accented with white, as the color of her mourning. But perhaps, one might hypothesize, it could also be envisioned as the color of her freedom.

How truly to the other extreme then, did Diane travel to become the thirty-eight-year-old lover of the nineteen-year-old son of the king? Correspondence between Diane and Henri anchor their affair in 1538, though there was much to his behavior toward her which smacks of infatuation and obsession long before then. Ransomed to the Holy Emperor at a tender age by his father’s defeat upon the battlefield, Henri returned to France a sullen young man. Diane, already returned to court a widow, was put in charge of teaching him the ways of a courtier. She did her job with utmost efficiency. Propriety and decency be damned, their need and love for each other would brook no constraints. Henri’s marriage to Catherine de’ Medici was no deterrent either; the women would share his affections as they shared a grandmother.

As with the ‘celebrities’ of our own time, rumors of these two fierce and passionate women abounded; but in many cases, the genesis of the gossip began with the other. Did Anne have affairs other than that with the king? Probably. Did Diane spread the conjecture of such extra-curricular activities with lip-smacking pleasure? Undoubtedly. Was Diane ever held an arm’s length apart in the court of François because of her inappropriate relationship with a much younger man? One would undoubtedly believe it to be so. Was the ostracism enhanced by the machinations of Anne and her cohorts? Most assuredly.

Their bickering and squabbling knew no bounds, stretching far across the trivial and into the realms of politics and religion, each in turn influencing the kings with whom they shared a bed, pitting father and son against each other in their efforts to be the ‘queen’ of the court. The historical fact of these turbulent women makes any historical fiction almost pale in comparison and yet their skirmishes lend layers of inspired sub-plots.

The lifelong—decades-long—dedication of these mistresses to their ‘kings’, their collusions and thirst for preeminence and power did not, ultimately and unfortunately, allow them to end their lives with the same glory and splendor with which each lived by the side of their lovers. Each died a lonely death far from the elaborate courts they graced. But, if the ties of the heart bind us long after these bodies are cast aside, then perhaps Anne and Diane are with their men still.
Posted by M.C.V. EGAN at 9:00 AM