My first book:
THE COURTIER'S SECRET: It's Inspiration and Most Enigmatic Character


France, 1682. Louis XIV, the Sun King, is at the height of his power, his court dazzles with opulent glory. For many privileged young women, Versailles is a paradise. For others, it is a gilded and bejeweled cage. Jeanne Yvette Mas du Bois is unlike most other courtiers and the flavor of decadence tastes bitter upon her tongue. Her thirst for knowledge and purpose entices her father’s brutal wrath, but her Uncle Jules encourages Jeanne’s independence, secretly teaching her the art of the sword in the palace’s labyrinthine basement…

When two of the king’s Musketeers are beset by criminals who are mere feet from Jeanne’s fencing lesson, she intervenes, saving one of the Musketeers’ lives. Hidden behind her mask, Jeanne is mistaken for a man. As “Jean Luc,” Jeanne is admitted to an inner circle where she learns of an assassination plot against the Queen. As Jean Luc, she is permitted to bring her intelligence and swordsmanship to bear. And as Jean Luc, she is free to love the man of her choosing…even if she can never have him. Now, with the Queen in jeopardy, and her own double life making her privy to the tangled intrigues at court, Jeanne is in a powerful—yet increasingly perilous—position. 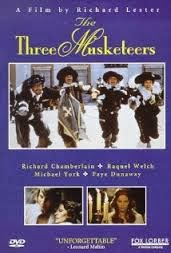 This was my first book, published in 2009, but its inspiration came to me in 1973, when I was 15 years old.  In that year,  I saaw the version of THE THREE MUSKETEERS starring Michael York and Rachel Welch. I became obsessed with all things Musketeer. But my fantasies took on a bit of a twist: I wanted to look like Rachel Welch/Constance (wear the beautiful gowns, have the gorgeous men fighting over me), but I wanted the adventures of Michael York/D'Artagnan (I wanted to save the world). I read every volume on the Musketeers that Alexandre Dumas wrote. That was the first seed for THE COURTIER’S SECRET.

While I lived vicariously through Jeanne/Jean Luc, the most dashing of characters in THE COURTIER'S SECRET, is none other than Louis XIV himself.

Here's a glimpse into the enigmatic king and an excerpt from THE COURTIER'S SECRET:

Your eyes flutter open, sight still hazy with the fuzziness of sleep. At eight o’clock, the curtains around your bed--sequestered as it is in a gold balustrade alcove—are thrown open by your valet de chambre, the one man to have slept in the same room as you. Your childhood nurse bends gingerly down over you, placing a kiss upon your forehead as the chief physician and the chief surgeon look on. Your chamber pot is removed and the curtains are drawn. You wait.

At a quarter past the hour, the curtains are opened once more. Now the Grand Chamberlain is allowed entrée, bringing with him only those who has kowtowed the most exuberantly, curried the most favor—only those whom you have deemed worthy to experience the privilege of watching you rise. You are the King of France, and your lever (rising ceremony) continues.

From The Courtier’s Secret:

Louis rose from his bed, taking a drink from the cup of sage tea at his bedside, then knelt to say some quick prayers, oblivious to the growing activity at the edges of his room.

Behind Mme. Hamelin, the morning’s procession began. Three doctors, including the King’s First Physician and his First Surgeon, entered, all three men elaborately dressed in their enveloping black robes, long wigs of white curls, and tall, peaked hats belonging only to those of their vocation. After a cursory examination by all three men, the parade of nobles began.

The First Entrance, led by the Princes of the Blood, was fairly short. With barely an open eye and no inhibitions whatsoever, Louis strode to the corner, lifted his nightshirt, and relieved himself in his chaise percée. Nowhere was the lack of privacy more evident.

The Kings of France lived under the constant eye of their people; even here in what should have been a person’s most private moment. The young and old men bowed to their sovereign as the Grand Chamberlain handed over the dressing gown, the one presented by the First Lord of the Bedchamber, to the King. With dressing gown in place, Louis gracefully pulled on his own hose, only to have a couple of high dignitaries kneel and fasten his bejeweled garters for him. They stood, signaling the Second Entrance to begin.

Today Jules de Bourbon, the son of the Prince de Condé, led this larger group of courtiers, traditionally preceded by the First Nobleman of the Realm, the highest–ranking man in attendance each day. Not far behind him, Henri entered the room. A few steps behind him, Gaston du Bois fumed, spying the young man entering before him. Gaston recognized him from the soirée the night before, but his appearance here this morning, and so far at the front of the procession, made Gaston wonder about the true identity of this young cavalier.

The Third Entrance began to make their way in, line after line of barons and peers, bowing and scraping and bumping one another in their thirst to be in front and perhaps be the one bestowed with the honor of handing the King his waistcoat. The Fourth Entrance, including the Secretaries of State, quickly followed these men. Louvois strode before Colbert, though the older man retained seniority by greater rank as well as age. The Secretary of Finances moved much slower these days; he appeared wan, the skin on his round face pale and sagging around his deeply dimpled chin.

Any visiting ambassadors filled the Fifth Entrance, while the Sixth was by far the most colorful, made up of red cardinals and purple bishops. All the day’s lever participants were now in the room, close to one hundred men, and the final touches were put to the King’s outfit. The Master of the Wardrobe fastened the King’s jabot, then the Lord of the Neckcloths adjusted it.

Completely dressed, Louis bowed to the vast assembly before him, noticing every face, making a mental note of those whose faces he failed to see.
A King’s coucher—his daily retirement—is but the reverse of the lever, though it allowed women to pass by the king and bid him a good night as well.

Louis XIV was the master of the lever and coucher, understanding better than any sovereign that came before, the power in bestowing such privileges, using such leverage to his benefit. Deeply affected by the Fronde (an uprising of nobles traumatizing his early childhood), Louis plied every tool—every form of manipulation and coercion—to keep his court under his control.

“Russo Morin debuts with a novel as opulent and sparkling as Louis XIV’s court and as filled with intrigue, passion and excitement as a novel by Dumas…a feast for the senses.”
-RT Book Review

"Morin fills her tale with maidens, mistresses and musketeers mired in intrigue...supplying lots of action as Jeanne goes through quick costume changes, one minute a voluptuous virgin about to be raped, another a daring do-gooder, rapier in hand."
-Publishers Weekly
Posted by M.C.V. EGAN at 9:00 AM