DESERTION and THE AMERICAN SOLDIER 1776-2006 by Robert Fantina 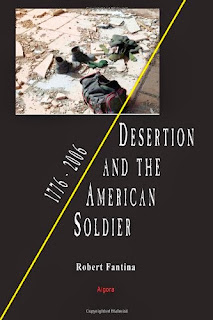 Military desertion, its reasons and consequences, are not commonly known in America. In most cases, the reasons soldiers desert are inherent in the military system itself. The author investigates those reasons, from the American Revolution to the Iraqi occupation, and describes the government's often-brutal response to deserters.
Desertion and the American Soldier: 1776 2006 is a history and analysis of military desertion from the Revolutionary War to the Iraqi Occupation. The main topics consist of the following:
The political, economic and social conditions of each time period;
The government's continued insistence on linking desertion with cowardice, despite extensive evidence to the contrary, and
The motivations for desertions.
Despite the US government's continued insistence on linking desertion with cowardice, the motivations for desertion are many and complex, and are either rooted in or encouraged by military policy. This book describes the official policies on desertion that were in force during each conflict and how they were generally implemented; problems in the military justice system; and the motivations for desertions. Comprehensive data and interviews with deserters are included.
Deserters from the US military have generally been referred to as cowards and traitors. This is a significant deception and one that has been accepted for generations. If cowardice and betrayal are not, in fact, the motivating factors for the majority of those who illegally depart from the US military, the question must be asked: Why do they desert? Are the issues that caused soldiers to flee to Canada in 2006 the same as those that caused Union soldiers to leave campaigns in Richmond, Virginia and return to their homes in the north? If not, how have the motivations evolved? What, exactly, causes a soldier, sometimes with a history of battle campaigns, to say enough'?
Most of the causes of desertion are inherent in the military system itself, and this is carefully detailed within this book. Through the use of the government's own studies and statistics throughout history, along with information from other sources, the problems of the military system that cause desertion are detailed.
Along with the reasons for desertion, the government's changing response to it is discussed. Various forms of what can only be classified as torture have often been implemented, with either tacit or open approval by the US government. The author suggests that the government's response to desertion is simply a political tool to not only keep soldiers in the ranks, thus helping to further the country's goals (whether honorable or not), but also to keep the average citizen behind those goals. While the tactics of so doing have advanced through the last two centuries, the purposes have changed little.

Robert Fantina is an activist and journalist, working for peace and social justice. While living in the U.S., he actively supported gun control, and opposed the war in Iraq, prior to and following the U.S. invasion of that country. Shortly after the 2004 presidential election he moved to Canada. While living in Whitehorse (Yukon Territory), he wrote 'Desertion and the American Soldier: 1776 - 2006.'
He is also the author of the novel, 'Look Not Unto the Morrow,' a Vietnam-era, anti-war love story.
His forthcoming book, available in November of 2013, is titled, 'Empire, Racism and Genocide: A History of U.S. Foreign Policy'.
He is currently active in supporting the human rights struggles of the Palestinian people.
Mr. Fantina now resides in Kitchener, Ontario. Visit his web page at RobertFantina .com