Three Sisters with a Colorful History by UVI POZNANSKY

"Having fled from Poland during World War II, the three Rosenblatt sisters arrived in Paris, where they discovered glamor, or at least the chance for it.
They bleached their hair super blond, so as to put the shtetl, and the horrors they must have suffered, right out of their mind, along with the old way of life.
Around the same time, they changed their names to Brigitte, Monique, and Veronique. Along with their names, they threw out a few other things which had failed to serve them: their long, dark skirts, and their modesty.
Wearing frilly underwear and black stockings, they auditioned for a show at a nightclub, a highly acclaimed nightclub called the Folies Bergère—only to be rejected, because sadly, their dance routine was too nice and conservative; which made them furious, and even more driven to make it.
So with clenched teeth, they learned how to lift their skirts, and flap them about in a highly erotic, flirtatious manner. After several months of hard, painstaking work, the three sisters finally became an overnight sensation.
They ended up joining a cheaply produced show in the nightclub district of Montmartre. Their fame spread. They became known for their fancy cancan costumes, which left them practically naked."

In my contemporary fiction novel titled Apart From Love, the three Rosenblatt sisters have a colorful history. I invite you to listen to the voice of one of them, the acid-eyed aunt Hadassa--narrated by the gifted actor David Kudler--in a letter she writes to Ben, her nephew. You haven’t lived until you’ve heard an aged Jewish lady singing Bryan Adams...


If your browser wouldn't play it, try this.

Treat yourself to a gift!
Download a ★★★★★ novel with 49 reviews
Apart From Love

And take a listen to the story
Apart From Love 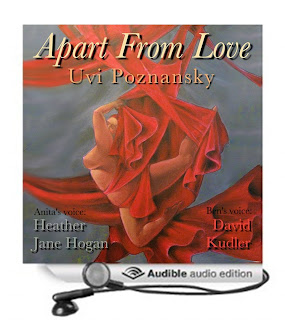