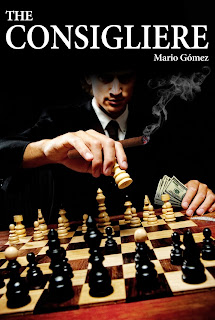 The black hand of La Cosa Nostra meets the sinister underworld of an equally Machiavellian, Mexican drug cartel. Where Faustino, an up and coming Wall Street stockbroker, is living his dream of wealth, status and power. A man who long ago swore himself to a single end: to escape like a pursued criminal the poison barbed tentacles of the poverty from which he arose. His success, is perpetually shadowed by Paul Banelli, best known as don Banelli, who reigns as the capo di tutti capi—boss of all bosses—of the ever notorious La Cosa Nostra.
His relationship with the Don turns precarious when Michelle Banelli—the precocious, pressing, and alluring only daughter of the mob boss—sets her sights on more than just fashion, high society, and, of course, being the apple of her father’s eye. She decides that for long enough her and Faustino have toyed with the faux indifference and lie that nothing more than a platonic, sibling-like affection exists between them. Her carelessness leads Faustino into a quagmire of blackmail, kidnapping and murder, where to survive he must forfeit the life and position he has worked so hard to attain. He now flees, not only poverty, but a vendetta, that will stop at nothing to devour him.
Faustino heads for the border, hoping to lose himself among his native roots: Mexico. In doing so he turns his back on everything, that up until now, has defined him; all to submerge and disguise himself in the very poverty he vowed never to return to. Where he soon finds himself tangled and quartered in between a friendship more akin to a brotherhood; an unspoken but ever-present debt of gratitude and fealty for don Banelli; a Mexican drug lord, Enrico Mezón, who despite being a sociopath, possesses the keys to his aegis; and finally, the mesmerizing niece of Enrico, who will stop at nothing to possess his affection, control his mind, and own his heart—a heart that little does she know belongs to another. Calling to task years of the Don’s tutelage, bringing to fruition a kind of iron-willed mental acuity of purpose and determination to overcome the jockeying oppositions threatening from every side. Learning first hand, that true greatness is never achieved outside of adversity.
With one hand he dips into the truth of his past, discovering a secret that up until now the Don has guarded with unflinching resolve; with the other he seizes the tainted opportunity from the blackened hand of the Mezón cartel: taking it upon himself to bridge a chasm of distrust, greed, and mutual animosity between two crime families. An endeavor that will demand his acquired acumen and finesse in finance along side the wicked statesmanship of Machiavelli himself, so as to appease two masters with one life. Suddenly he’s stuck in a tug-a-war between his own desires and a duty to a way of life not entirely his own. A way of life bound by Omerta, a code of silence and honor, where the only vindication from betrayal...is death.
www.amazon.com~The-Consigliere
Posted by M.C.V. EGAN at 8:16 PM