Michael McCormick, Vietnam and Me


My work is mostly about the Vietnam war. My novella, Across The Pond by Michael McCormick, deals with the trials and tribulations encountered by Vietnam veterans, both during and after the Vietnam war. The United States sent it’s young men into battle in Southeast Asia, used them once and then threw them away.


The war itself was particularly brutal, especially during the Tet Offensive of 1968, in Hue and along the DMZ, in the northern part of South Vietnam. More bombs were dropped on Vietnam during the war than were dropped in all of World War II. It is estimated that between one and three million Vietnamese died. Fifty thousand young American’s died.


After all this carnage, when the Vietnam veterans returned home, they were treated very badly. The U.S. Government, the American people and the very society that sent them to war in the first place scape-goated the veterans. They were blamed for the whole mess, cast out, ridiculed, called suckers and rejected. This is me during the war, second from left. 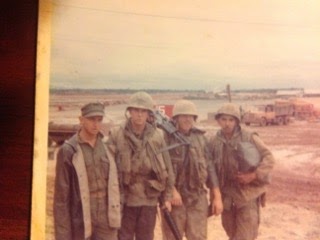 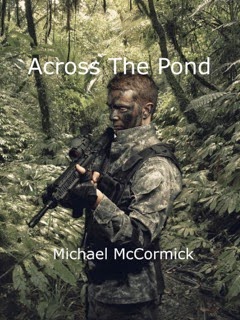 Across The Pond by Michael McCormick is the story of a young American who fights for his country during the war in Vietnam, only to be rejected when he returns home. The author based the story on his personal experience as an infantry squad leader who served in combat. Ron Kovic, author of Born On The Fourth of July writes in the foreword, "This little book with it's deeply compelling narrative grips the reader from the very beginning and does not let go. It is written with the violence and fury of Leon Uris's Battle Cry, and the tenderness and compassion of a simple poet. I believe it will be recognized as one of the important books to come out of the Vietnam war."


Michael McCormick is the author of Across The Pond. He enlisted in the United States Marine Corps just out of high school at the age of 17. Soon after, he found himself in battle in the jungles and rice paddies of Vietnam. He was nearly killed on several occasions, but managed to survive and return home at age 19. After the war, Michael earned his B.A. in psychology and his M.A. in clinical psychology. He lives in Oakland, California with his wife Gina. You can contact him at: mikemccormick49@ymail.com.


“I think war is a crime, if you don’t believe me, ask the infantry, ask the dead.”


“With this work, McCormick takes his place among the other important chroniclers of this period.”


“Sean McBride had survived his war in Vietnam. At the age of nineteen, he was about to be decorated with the Silver Star Medal, the third highest military award for gallantry in action.”


“His experience in war had shaped his thinking in unique ways. He knew he was different from other men."

a Rafflecopter giveaway
Posted by M.C.V. EGAN at 12:00 AM