I do like this forgotten woman! I have a lot of respect for the other women we have studied astrologically this week but Fannie seems like a real hoot. Frances "Fannie" Benjamin Johnston was born January 15, 1864 in Grafton, West Virginia to a very wealthy family. Her creativity became evident while studying at some the best schools in Washington, D.C. and Paris and she received a gift of a camera from none other than George Eastman, founder of what would become Eastman Kodak Company.

Thanks to her well-connected family, Fannie soon found herself taking pictures of everyone in Washington society from Booker T. Washington to Mark Twain. ” Being the only female photographer in Washington provided no hindrance to her ambition and in 1894 she opened her own studio. After photographing the 1906 wedding of Alice Roosevelt Longworth, daughter of President Theodore Roosevelt, she received the moniker, “Photographer of the American Court.”

It should come as no surprise to anyone who has been reading this week’s entries that Fannie had her South Node, or past life indicator, in the creative sign of Taurus.* Someone talented in any artistic expression would likely to have spent a few at least a few recent lives honing their skills under Taurus’ ruler, the creative, lovely Venus.

What makes this chart more interesting is that Pluto, the sign of change and transformation, and Vesta, an asteroid named after the dedicated Vestal Virgins which in Astrology indicates where our passions lie, are both sitting next to the South Node. Not only did she come from creative lives but also she was born determined to bring change.

In 1896, Fannie scandalized Washington society by appearing in a photo with a cigarette in one hand and a beer stein in the other. Oh yes, and that hand holding the beer was hiking her skirt up to her knee. It did not matter that she was wearing the thick black stockings of the day – she was showing off the whole lower portion of her leg. How did they survive?

Six years earlier, she started tongues wagging by doing a self-portrait dressed as a man with a fake moustache and holding onto a bicycle. I told you she was a hoot.

Like all of the women I have written about this week, she too used her South Node in service to her North. Its opposite sign, Scorpio, balances a Taurus South node. Scorpio, ruled by Pluto, demands that we go deep within ourselves to find bring change. Beauty is fine – depth is sacred. Fannie Johnson did more than just break the social restrictions of the day. Her photographs of mineworkers, factory women and the poor and disenfranchised kept the forgotten in the forefront of political thought then and serve today as poignant reminders of all of the lives History forgets.

Had I been fortunate enough to have Ms. Johnston for dinner I would have been more worried about setting a table pleasing to her photographic eye. I would defiantly go for a pretty dish fit for a Taurus, probably my Scallops With Mushrooms. 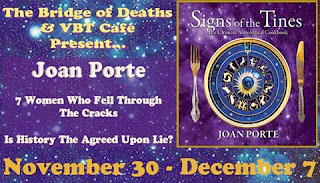 *For more explanation on the North and South Nodes in a chart, please see my article on Ida Wells written earlier this week.
Joan Porte is the author of “Signs of the Tines: The Ultimate Astrological Cookbook.”
It is available at Amazon, Barnes and Noble and www.signsofthetines.com
For karmic soul chart readings contact Joan at Joansastrology@gmail.com or visit her blog at www.joansastrology.blogspot.com
Download her podcast Astrological Cooking at
http://webtalkradio.net/internet-talk-radio/astrological-cook/