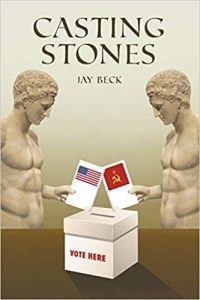 in his next book, "Casting Stones." Set in Greece during the 1985 elections, the historical novel pits the United States against the Soviet Union in a battle over Greece's future political economic soul. The novel is set in the turbulent times of airline hijackings, terror bombing and assassinations. The Soviet KGB, Greek secret police and terrorists all conspire against Mark Young as he tries to win a national election while simultaneously rescuing the most valuable ancient sculpture ever created. Mark is torn between the turmoil in Greece and a critical situation threatening to end his relationship with his girlfriend, Vicki back in Washington, D.C. All of these diverse threads come together in an unexpected and thrilling conclusion. Buy on

By writing fiction, I’ve try to expand on my history and the events I have observed. I still have a long way to go in tapping into all of that rich material, particularly since politics and entertainment so often go hand in hand, as I hope I have demonstrated in my work. These will be exciting areas for me
to investigate and discuss while I continue to write about them. As I mentioned earlier, the third book in the trilogy concerns the interactions between the campaigns and the time of history of Ross Perot, Bill Clinton, and George Bush, a vast political world for me to plumb. I have stories to tell. Enter to win a paperback

Once again, this morning the goats were out of sorts. The rattling of the fence awoke Anatos and he saw in the dim light that they were agitated and gathered pressed to the far side of the little pen, anxious to leave the overhanging mountainside, and find the gentle, sunny hills up the valley from the stone hut. Likely, they were also anxious to move away from the unusual odor that sometimes came up from the cracks in the nearby rocks and the tremors which had been coming more frequently. He could not smell it today, but sometimes there was something different in the air, not unpleasant, but definitely an unusual odor, not unlike rotten eggs. After clearing the ash from last night’s fire and banking in a little new wood, he finished eating his bread and milk and put down his chipped bowl. When he looked out now, he saw in the brighter light that the goats had pushed open the gate by themselves and were wandering up into his small valley, chewing on the spring leaves starting to grow on the twigs of hillside bushes, and the weeds or grass … anything foolish enough to thrive in the presence of hungry goats. He then got his wife up, smoothed her hair, put a tattered robe about her shoulders and sat her in the wobbly chair, that he had been intending to fix, by the one window in the house. There she could watch the goats and feel the sun coming down the valley to warm her while he did his chores. The sky was clear and he could tell from the flies rising in the humidity that it would be another hot day. As he walked slowly toward the goats, out away from the shadow of the tall and menacing hillside behind him, he could see down the narrow valley to the tops of the stones from his first house that had been built near the olive grove. That was years ago though, when he had first brought his family from Macedonia to the area of Delphi at the time when there were more tourists and he had his store by the road with food and the trinkets his wife made. Down toward the foot of the small valley where he had lived before, there was more water from the thin mountain stream and his trees and garden had grown much better closer to the road than the patch he tended up here in this dry soil. He had lived below in the time before the king came and brought with him the son of Anatos who was a solder in the king’s army. He remembered the stories told to him about the monarch by his son who had gone to school with the future king in Macedonia years before. Alexander had rewarded his son by making him an officer in his army and part of his personal guard. When Alexander came to see the Oracle, his son had proudly led the personal guard, and they decided to make camp in this valley, which at that time was a great honor for Anatos. He had been disappointed that many of the soldiers in the camp guard did not behave well, and his garden and most of the trees were destroyed and burned in campfires by the time they left. Later, he grew tired of people coming to see where the king had made his tent and slept, so after his son returned from Athens and the secret mission to which Alexander had sent him, he moved his wife back up to this higher place along the side of the mountain and built this smaller, one-room house where they were no longer disturbed. Here he could do his duty by watching over what his son had brought back from the stone factory. He was glad their other children were back in Macedonia and were not in this place where life was becoming more difficult. After checking that his goats were safely grazing and giving his wife some fresh water, Anatos entered the nearby cave with the humility and awe he always felt when he was among such a powerful presence. His slid his hand along the dusty rock to guide his entrance, and he wondered why after so many years there was still no word from his son or the people who worked for King Alexander in Macedonia. He was worried. They had been too long in Persia and in other places he had never heard of where they had their battles. Rumors of great victories came back to him, and he knew they must be attributed to the gods he stood before now. He had the local scribe send message after message to his son and to friends he had known in Macedonia, and even to Alexander’s mother, Queen Olympias. When would his son return?
Posted by M.C.V. EGAN at 10:26 AM