A Colonial Romance/Mystery - Dangerous Indenture - by Kelli A. Wilkins


By Kelli A. Wilkins
Hi everyone, 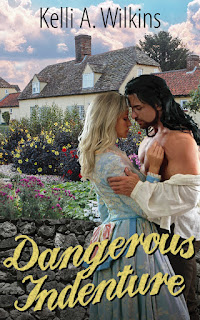 Today I’m sharing a look at the making of my historical romance, Dangerous Indenture. I’ll discuss how the book came about, the research involved, and how I created these unique characters.
As most readers know, I write romances in nearly every genre: contemporary, historical, fantasy, gay, and paranormal. When I write historical romances I never know where (or when) my story will take me. Redemption from a Dark Past is set in the kingdom of Hungary, Loving a Wild Stranger is a pioneer romance set in 1823, and Dangerous Indenture is a sensual historical/mystery set in Pennsylvania Colony in the early 1700s.
Here’s the book summary and links:

Dangerous Indenture
Indentured for five years… how long can Shauna resist her master’s son?
Desperate to escape her past in Ireland, Shauna Farrow signs on to become an indentured servant to Joshua Stewart, a wealthy man in Pennsylvania Colony. But a life of servitude quickly turns to drudgery, and Shauna’s hopes for starting over and creating a better life for herself are waning—until she meets her master’s roguish son, Ashton.
Ashton needs to redeem himself in his father’s eyes and earn the respect he has always longed for. Meeting Shauna turns his life around, and he sets out to win her heart. Torn between propriety and passion, Shauna struggles against her growing attraction to Ashton as long as she can.
But amidst their flirting, something dark stirs. Shauna soon discovers why no other servants wanted to work for the strange Stewart family.
Stewart House has an unsavory reputation: a previous servant died there under mysterious circumstances. When another servant goes missing in the middle of the night, Shauna is convinced that a member of the family is responsible.

Shauna’s investigation leads her close to the truth, and yet, she’s not sure who she can trust. Events take a deadly turn when she confronts the murderer and discovers the mystery of the Stewart family.

Will Shauna be rescued before time runs out, or will she meet with the same fate as the other servants?
You can order Dangerous Indenture here:
Amazon: https://www.amazon.com/dp/B07PJVQ7XJ
All other platforms: https://books2read.com/u/3JyROP

***
So, how did the novel come about? Dangerous Indenture is one of those books that just jumped into my head. (Yes, every so often that happens to writers.) One day, I overheard the name Shawna Farrell, but I thought I’d heard Shauna Farrow. The name stuck with me and I wrote it down.
A few minutes later, I knew all about her: she was an Irish indentured servant who came to Pennsylvania Colony and worked at a house where a previous servant was murdered. Once I knew that, I started outlining the book.
Before I wrote a word, I did a lot of research. I was starting from a good place with the book—I knew where I wanted to set the story and in approximately what timeframe it should take place.
From there, I spent time in the library going through history books, reading up on Colonial times (What life was like, what people wore, ate, etc.) and indentured servants (Where did they come from? Why did they leave their home country?).
As I wrote, I incorporated my research as background information. This gives the book a rich, historical feel without going overboard with details that slow down a scene or are of no interest to readers.
When I’m writing historical romances, I include details and descriptions that are integral to the story. I don’t bog down the plot with a step-by-step procedure for churning butter or how to saddle a horse, and I don’t go into an endless description of how to unfasten a corset (unless it’s befuddling a hero who is eager to remove it!)
And just because historical romances are set in time periods before cars, the Internet, and cell phones, that doesn’t (or shouldn’t) make them boring. My historicals include plenty of action, adventure, intrigue, danger, comedy, and sensual love scenes.
When I wrote Dangerous Indenture, I especially enjoyed creating the characters and setting the stage for the drama that’s about to unfold. Right from the start, we’re told that Stewart House is a place to be wary of, and then we (and Shauna) meet the master of the house, Joshua Stewart, and his strange family.
Our hero, Ashton Bailey, is flawed and has a lot of problems to overcome. For starters, he’s known as the black sheep of the family and has been sent home in disgrace. He has a reputation as a drunkard and a womanizer, and tends to get himself into troubling situations. By giving Ashton all this “baggage” I made him vulnerable and provided him with lofty goals to reach.
Shauna has come to the Colonies to start over and make a new life for herself. The last thing she wants is to fall in love with anyone—and then she meets Ashton. Shauna is headstrong and independent, and not your typical heroine. She’s brash and opinionated and falls in love with Ashton despite all of his socially unacceptable flaws. Ashton gives her the strength and encouragement she needs to keep going when things look bleak, and he stands up for her at a critical plot point in the story.
When I developed the secondary characters, I made sure to give them all interesting backstories and unusual quirks. Joshua comes off as a mean bear of a man, Minerva just might be crazy (and a murderer), Colin is… a villain in many senses of the word, and Lila thought she had everything going for her—for a while. Not everyone in Stewart House is as they seem, however, and this adds another level of mystery and intrigue to the book.
I love the characters and the fact that Dangerous Indenture is a romance blended with mystery. I had never written a romance set in Colonial times before, and combining all these elements into this Gothic-type story was a lot of fun.
I hope you enjoyed this inside look at the making of Dangerous Indenture. I welcome comments and questions from readers. Be sure to follow my blog for the latest updates and visit me on social media.
Happy Reading,
Kelli A. Wilkins

Kelli A. Wilkins is an award-winning author who has published more than 100 short stories, 19 romance novels, 5 non-fiction books, and 2 online writing courses. Her romances span many genres and heat levels, and she’s also been known to scare readers with her horror stories.
Her historical romance, Dangerous Indenture, was released in March 2019. This full-length novel is set in Pennsylvania Colony and blends a sensual romance with mystery and suspense.

She published the second half of her flash fiction series, Cupid’s Schemes, in early 2019. These two volumes of lighthearted mini-romances are perfect reads for a quick lunchtime escape or an after-work indulgence.
Kelli released her latest Teachable mini-course, Fiction Basics: Finding Ideas in February 2019. She authored Fiction Writing for Beginners through Teachable in 2018. These courses are perfect for anyone who wants to learn how to write.
Visit: https://kelliwilkins.teachable.com/ for more details.
If you like horror fiction, don’t miss her latest novella, Nightmare in the North.
Kelli posts on her Facebook author page: https://www.facebook.com/AuthorKelliWilkins
and Twitter: www.Twitter.com/KWilkinsauthor.
Visit her website www.KelliWilkins.com
and blog http://kelliwilkinsauthor.blogspot.com/ to learn more about all of her writings.

CATCH UP WITH KELLI