1128 Pope recognizes Knights Templar (From This Day in HISTORY)

On January 13th 1128, Pope Honorius II  grants a papal sanction to the military order known as the Knights Templar, declaring it to be an army of God. 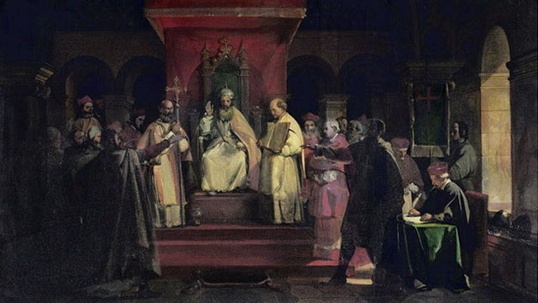 Led by the Frenchman Hughes de Payens, the Knights Templar organization was founded in 1118. Its self-imposed mission was to protect Christian pilgrims on their way to the Holy Land during the Crusades, the series of military expeditions aimed at defeating Muslims in Palestine. The Templars took their name from the location of their headquarters, at Jerusalem’s Temple Mount. For a while, the Templars had only nine members, mostly due to their rigid rules. In addition to having noble birth, the knights were required to take strict vows of poverty, obedience and chastity. In 1127, new promotional efforts convinced many more noblemen to join the order, gradually increasing its size and influence. 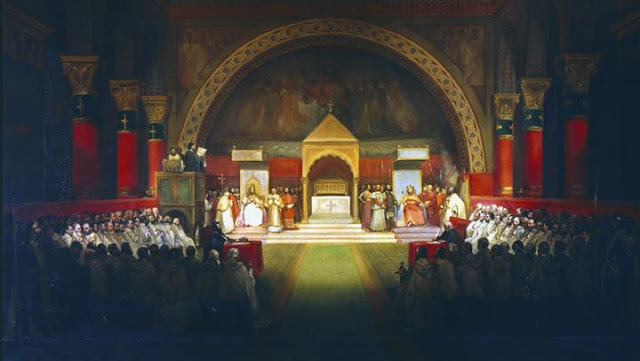 While the individual knights were not allowed to own property, there was no such restriction on the organization as a whole, and over the years many rich Christians gave gifts of land and other valuables to support the Knights Templar. By the time the Crusades ended unsuccessfully in the early 14th century, the order had grown extremely wealthy, provoking the jealousy of both religious and secular powers. In 1307, King Philip IV of France and Pope Clement V combined to take down the Knights Templar, arresting the grand master, Jacques de Molay, on charges of heresy, sacrilege and Satanism. Under torture, Molay and other leading Templars confessed and were eventually burned at the stake. Clement dissolved the Templars in 1312, assigning their property and monetary assets to a rival order, the Knights Hospitalers. In fact, though, Philip and his English counterpart, King Edward II, claimed most of the wealth after banning the organization from their respective countries.
READ MORE @ THIS DAY IN HISTORY
Posted by M.C.V. EGAN at 8:02 AM