IS HISTORY THE AGREED UPON LIE ? by CHRISTOPH FISCHER

Is history the agreed upon lie?


I must say that this is an excellent question and one that I have often thought about before writing historical novels.

When the Berlin Wall came down, the German press was full of Chancellor Kohl walking along a river with President Gorbachev and the myth was created that on this “walk-and-talk” only Kohl’s diplomatic skills led to the German reunification. Praise the hero and superman Kohl. But was it really likely that anyone wanted two separate German states or cared in the period that was Glasnost? At the times many bought into the story, after all, didn’t it sound nicer than the idea that Russia had no longer an interest in the broken satellite state? Still, the myth made its way to history books and has always slightly bothered me because in my view it was created for all the wrong reasons.


In my research for “The Luck of the Weissensteiners”, I came across quite a few sources that seemed politically coloured. One history book about Slovakia as a state from the middle ages to the presence only had a short chapter about the entire WWII era and it pretty much painted a whiter than white picture of Slovakia, an axis power at the time. Although it appears that the author didn’t even speak the language and had not researched within the country archives, there was no dispute about the book since it agreed with the polished version of events that many people in present day Slovakia would prefer to agree upon.

Archives have been destroyed by the axis powers, collaborators of Hitler managed to find their way back into the important positions, Communist regimes tried to white wash the former fascist past to bring the nation in line with its policy and many other factors might have come into play and make efficient research admittedly difficult. Let alone human sentiment and forgetfulness.


Mary Heimann learned Czech and did enormous research of her own for a book on Czechoslovakia as a state, but her findings are highly disputed, partially because they may not be totally waterproof and partially probably because they are painting a much less favourable picture of both Slovakia and the Czech Republic.


One example: Jews in Slovakia were safe for an extremely long time compared to other axis power states. The religious wing of the Fascist party claims credit for it. Others claim that the high price per head for each Jew that had to be paid to the German Reich had something to do with the reluctance of the then government to comply with Hitler’s demands.
Personal presidential exemption papers to save individual Jews from transportation allegedly were used in multiple thousands according to some sources but in much smaller numbers in others.

Admittedly, with so much original data destroyed and with such strong political and personal agendas to portray one’s country retrospectively, with eye witnesses dying away, who is to say which version is indeed true?


During my research for “The Luck of the Weissensteiners” I saw so many references made to the golden days of Vienna before WWI, the tolerant multi-cultural city and the Jew-friendly times. It was why I decided to set “Sebastian” in that period. My research for the new book however showed a much more complex and less favourable picture than I had anticipated. Particularly the work of Stefan Zweig, a Jew living in those times, challenges those assumptions strongly. Of course his work is mainly fiction and the history books can dismiss him easily as non-academic. So who do we believe?

Somewhere in my research a source wisely suggested that because of the horror that came twenty years later people’s memory changed their perception of the times and idealised the times in comparison, which makes a lot of sense.


The consequence for me as a writer is to keep checking data, to read all sides to a story and remember that history books are all relative when it comes to unquantifiable data. It is a continuous dispute and in most cases a wonderful challenge to think for yourself and maybe to find the occasional source material that brings in new light and aspects to what you think you knew. 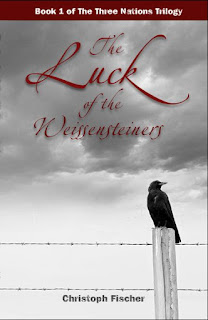 I tried in my books to use the controversy in my favour, to let different character make opposing statements, assumptions and predictions. Many of those characters didn’t have a television, radio or any type of reliable data to find out about what goes on beyond their own little corner of the world. And who can claim to have the comprehensive view, the complete information and can be sure to draw the right conclusions. All of this makes history exciting and a living process as long as it is not deliberately falsified. The line between misinterpretation and lie however are often more than blurred.

IN THE MATTER OF
NIKOLA TESLA A Romance Of The Mind

In The Matter Of Nikola Tesla places the reader squarely behind the eyes of the 20th Century's greatest inventive genius. Events play out within the framework of a unique love story. Tesla's inscrutable personality becomes clear in his motivations and sympathetic to the reader because the device of his mysterious Muse (based on his real-life description of her) allows us to enter the mystery of his solitary life. Only his thoughts and dialogue are fiction - the action is historically accurate.
Fans of historically accurate books with strong love stories (such as "Cold Mountain") will respond to Tesla's lifelong imaginary "Muse," as he himself described her. Tesla's story about the source of his inspirations was never believed during his life -- this book simply takes him at his word about the driving force of his incredible inventive imagination. Even so, his gratifying relationship with her only partly explains his 86 years of complete social isolation. The ghost of his deceased father, the devout Reverend Tesla, also torments him with a plague of doubts throughout the story.


Although the book is fictionalized through Tesla's eyes:
This story is populated with historical figures who actually played major roles in Tesla's life. Author Mark Twain was a frequent visitor, George Westinghouse robbed him of millions, Thomas Edison portrayed him as a lunatic in an attempt to suppress his inventions, and J.P. Morgan manipulated his funding to prevent him from building his Universal Power System. Tesla was aided by John Jacob Astor, but lost that friend when Astor died on the wreck of the Titanic in 1912.
Tesla is among the 20th Century's greatest forgotten heroes - a European by birth, and an adopted U.S. citizen who radically changed our world but suffered the worst of human ingratitude in return.

Why the time is right for this book:
Nikola Tesla's lifelong goal was to solve the problem of how to supply free, unlimited electricity to the entire planet. He knew that universal power could end poverty forever. Today, everyone knows about the world's energy crisis. They will be especially sympathetic with the mind that tried so hard to avert this for us, and with the fascinating eccentricities of his personality.
It is also a known fact that the U.S. Secret Service raided Tesla's New York hotel room the day he died and confiscated all of his papers before his body was taken away. Those papers remain unaccounted for today.

IN THE MATTER OF NIKOLAS TESLA: A Romance of the Mind

IN THE MATTER OF NIKOLAS TESLA: A Romance of the Mind

I try to write succinct reviews with no spoilers. That is what I posted on AMAZON under the title ELECTRIFYING (yes the pun was intended), for Anthony Flacco’s Book In The Matter of Nikolas Tesla; a Romance of the Mind.


I enjoyed the book tremendously and as others have chosen to write reviews full of spoilers I decided to write a LONG version here.


The opening chapter is more about Thomas Edison than Nikolas Tesla, and I must admit at first it confused me a little but after I got into the book I chose to go back and re-read the first chapter and smiled as I thought; Very clever Mr. Flacco. Here the author sets the tone for the theme that Nikolas Tesla was surrounded but strong powerful individuals and organizations that blocked his amazing progress and accordingly that of the world as a whole.


Today in the United States when we can see members of congress smiling and gloating that they managed to derail something just to make the president look bad; even if it hurts the country or society; background checks for guns anyone? It is very easy to grasp the manner in which NIKOLAS TESLA was treated.


The book cleverly presents Nikolas Tesla as a man with a muse with which due to his religious upbringing he has a complicated and tortured relationship.  It is a very clever way to show the struggles of the genius that was Nikolas Tesla.


The scientific experiments; whether in the form of success of failures will leave a curious reader wanting for more and Mr. Flacco very graciously offers sources in his afterword including a documentary for those who prefer to read fiction but are indeed curious about facts.


In my Amazon review I compare my experience to reading this book to Irving Stone’s biography of Vincent Van Gogh. The books are absolutely different but both books succeeded in pulling at my heartstrings and made me feel deeply for the historical figure.


In a very detailed and interesting review @ http://kddidit.wordpress.com/  I read that the reviewer felt ….  “I wish I had a time machine and could go back and help this man.”   I read a few other reviews and all seem to feel like embracing, helping and being there for Nikolas Tesla, which means that Mr. Flacco really succeeded in bringing the scientist in a very real way into our minds and hearts.

5.0 out of 5 stars  * * * * * ELECTRIFYING,
By
Maria Catalina Egan "M.C.V. Egan" (Delray Beach, Florida USA) - See all my reviews
(REAL NAME)
This review is from: In the Matter of Nikola Tesla: A Romance of the Mind (Kindle Edition)
First let me say that this book makes me wish there were more than five stars to rate it, far more.
It is absolutely electrifying!
The author's creative use of the muse Karina is very clever and entertaining. Each chapter is exciting and informative.
When I was 17 Irving Stone's Book LUST FOR LIFE made me fall in love with Vincent Van Gogh. I am now past 50 years old and I never expected an author to make me feel that way again, Mr. Anthony Flacco did.
This is an extraordinary historical Biography, full of courage and information; I checked, his account is historically accurate and his prose and imagination make the reader soar hand in hand through the life and inventions of Nikolas Tesla.
Readers be warned that you will fall in love with Nikolas Tesla as much as you will be sorely disappointed by other historical figures.