How The U.S. Got So Many Confederate Monuments
August 17, 2017 By Becky Little 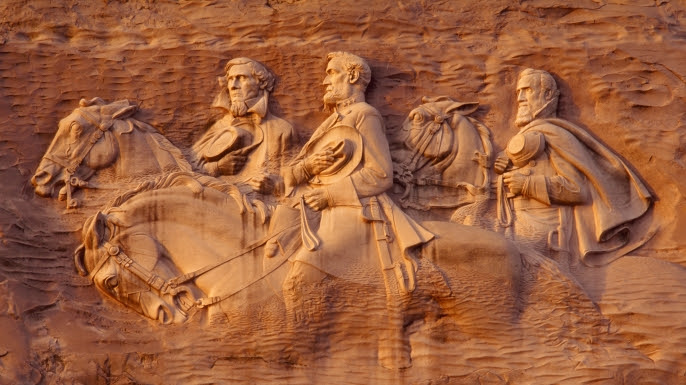 How The U.S. Got So Many Confederate Monuments August 17, 2017 By Becky Little Bas-relief sculpture of three of the leaders of the Confederacy on horseback: President Jefferson Davis, General Robert E. Lee and General Thomas "Stonewall" Jackson. Their likenesses are carved onto the side of Stone Mountain, the largest granite outcropping on earth. Print Cite Facebook Twitter Google While every statue in every town has a different origin, taken together, the 700 Confederate monuments in the United States tell a national story. Commemorations of those on the losing side of the Civil War, some are a lot newer than one might think. According to the Southern Poverty Law Center, which compiled a list of these monuments last year, these monuments are spread over 31 states plus the District of Columbia—far exceeding the 11 Confederate states that seceded at the outset of the Civil War. Most of these monuments did not go up immediately after the war’s end in 1865. During that time, commemorative markers of the Civil War tended to be memorials that mourned soldiers who had died, says Mark Elliott, a history professor at University of North Carolina, Greensboro.