History is the Agreed upon Lie guest post by Uvi Poznansky

Author of
Apart From Love
And its upcoming prequel, The Music of Us

All of us take Truth to mean an absolute account of reality. But since we view reality through the lens of who we are, our experience, our mood at a certain time, we create multiple versions of this reality, which may or may not agree with each other. When literature explores what reality may mean through multiple points of view and over long periods of time, it is searching for truth through its distortions, its reflections in history.

This distortion is exactly what fascinates me in my novel, Apart From Love, set in 1980, in which two characters, Ben and Anita, often describe the same sequence of events, but interpret it in an entirely different manner. “He said, she said.” Ben misunderstands his father, Lenny, because of anger, blame, and estrangement between them. It is only towards the end of the novel that the motives of the father begin to clarify in the mind of the son. I asked myself, how does reality look from the father’s point of view? Where does he come from?

His predicament--watching his wife, Natasha, slipping away from him due to her early-onset Alzheimer’s--is heart-rending to me. It fascinates me to such a degree that I find myself compelled to build an entire series around what happens to this family. It will be titled Still Life with Memories. I am writing a new novel for this series as we speak, which gives both Lenny and Natasha center stage, and takes them first to 1970 and then a full generation back, to 1941, to the beginning of their love story. This new volume of the series will be titled The Music of Us.

In 1970, there is only one thing more difficult in Lenny’s mind than talking to his son, who has left home, and that is writing to him. Amazingly, having to conceal what Natasha is going through makes every word—even on subjects unrelated to her condition—that much harder for him. Lenny finds himself oppressed by his own self-imposed discipline, the discipline of silence. This, over time, creates two different versions of reality: Lenny’s version of the events, which is different than Ben’s.

These are his thoughts:

And what can I tell him, really? That I keep digging into the past, mining its moments, trying to piece them together this way and that, dusting off each memory of Natasha, of how we were, the highs and lows of the music of us, to find out where the problem may have started?

Here is a phone conversation between Lenny and Natasha in 1941, when he was a young soldier and she--a rising star. This is the beginning of their love story. Note not only how chatty she is with him, but also the mechanics of a long distance call through the switchboard:

The Bell phone operator came on. I could hear her fumbling about at the switchboard, which I imagined as a high back panel, consisting of rows of front and back keys, front and back lamps, and cords all about, extending every which way, connecting the entire mess into circuits.
At the other end, “Hello,” said Natasha. Her voice sounded intermittent.
“She said Hello,” said the operator.
“Oh, Hi,” said I.
“He said Hi,” said the operator.
We laughed. I could barely hear what I thought were giggles, as they were breaking off, coming back on. After a while the connection got better, but at the risk of it deteriorating again, we found ourselves talking rather fast.
I asked Natasha if she got my photograph, the one I had sent earlier that month. It showed me amongst others in a group of Marines, all of us dressed in uniforms, looking exactly alike.
She said yes, and was I the Marine second from the left, squatting, and in return I should expect a photograph of hers, which I’d better treat with extreme care, not the way I had treated her first envelope, which meant placing it in a dry, safe place, preferably close to my heart, because this is the earliest picture she had with her papa, so it was dear to her, and she’s giving it to me as a special gift, and on an entirely different note, what would I say if she told me that this summer she plans to take some time off from performances, which would give us an opportunity to meet, and even if her Mama would object to this idea, because she protects her only daughter from dates with soldiers in general, because in her opinion they’re good-for-nothing low-lives who sleep who-knows-where with God-knows-who, she, Natasha, would love to see me if, and that’s a big if,  I could arrange a visit.

Compare this with another phone conversation between them, 40 years later, described by their son in my novel Apart From Love. Here Lenny calls Natasha, who can no longer understand him, let alone respond, because by now she is afflicted with the disease.

Stopping for a moment by the console table he dials, listens, and redials. His ear is pressed to the handset, which is connected by a long, spiral cord to the phone, which is nearly buried by various papers, and hidden behind an old alarm clock. The cord is stretching tensely in midair, or slithering behind his back as he goes back to hobbling to and fro across the floor.
There he goes, reaching the wall, banging it accidentally with the bottom of the crutch and then, somehow, turning around, aiming to reach the opposite wall and bang, turning around again, while listening intently to the earphone. With each footfall, my father attempts to cut through some stutter. He tries, it seems, to restart a conversation.
He pays no attention to me. Still, his voice is deliberately lowered, which tells me this is private. I should turn away, really, and keep myself far out of earshot—but for some reason I make no move, and no sound either. Why is the connection so bad, I wonder, and who is it, who could it be at the other end of the line?
My father swallows his breath several times, his face turning pale, his eyes—miserable, until finally he bursts out shouting, “Listen, it’s Lenny! Can you hear me, dear? In God’s name, Natasha, it’s me—”

Perhaps you have figured out by now why I call the series Still Life with Memories. Think about the haircut style of a soldier in this era, the woman’s fashion in hats and dresses, The design of cars, the gadgets (such as here, the telephone), the furniture, the stamps and envelopes--these are the details that give a solid background to the story and allow it to harken back to an earlier era in history. 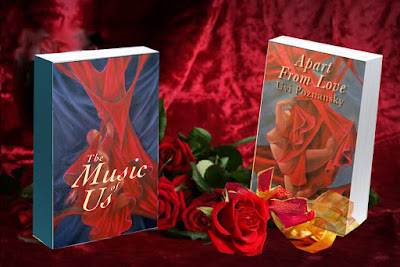