On August 15, 1939, weeks before England and France officially declared war on Nazi Germany, a tragic albeit seemingly routine airplane crash happened over Denmark and a bridge that would see so much horror in the coming years it would receive the moniker “The Bridge of Deaths.” Onboard the doomed flight were two Standard Oil of New Jersey employees, A German Corporate Lawyer, an English Member of Parliament and a crewmember for British Airways LTD. The fast-approaching war hindered any investigation into the crash.


Fortunately, the grandchild of one of the men who died that day, M.C.V Egan, did the research that had been so sorely lacking in the years after the crash. Combining old-fashioned gumshoe work and fascinating metaphysical techniques she learned of conspiracies behind what on the surface was an innocuous crash. She has detailed her work in a gripping book, “The Bridge of Deaths.” 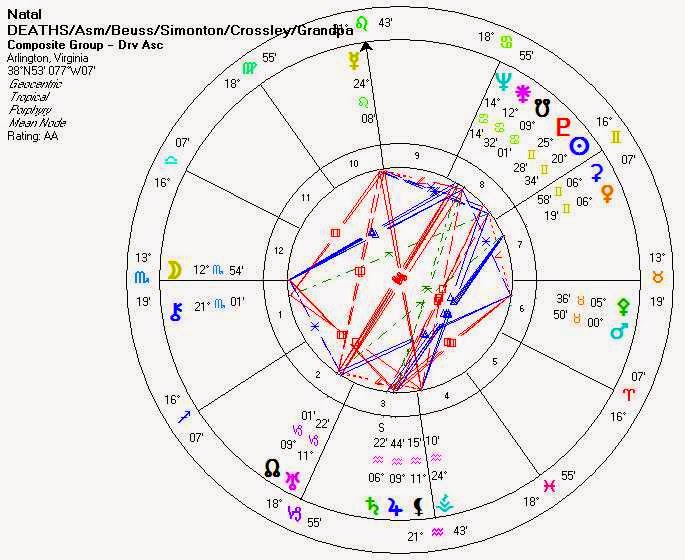 What is the astrology of the crash and why was Egan lead to utilizing metaphysics for the answer? Let us look first at the astrology of the crash (see BOD insert 1). At the time of the crash, there was a stellium (more than 5 bodies in one house) in the ninth house, the house of international affairs. We have there the Sun, Moon, Mercury, Venus, Pluto and Ceres all in the sign of Leo. This is a very powerful placement. All of the personal planets (the inner) except Mars and powerful Pluto, the change agent, and Ceres the nurturer all in the fire, fixed sign of Leo indicates and intense activity in the arena of international and intercultural affairs. This is energy rife with an intensity that contradicts the idea that these people were on a pleasure trip. Informational exchange is dominant in the Sun, Mercury interplay and emotions were involved (the Moon). A change, a big change is seen in the form Pluto the harbinger of death and transformation – a big change to life and caring (Ceres.)


My eye goes to two other placements in this chart. The first is Pallas Athena, the warrior goddess asteroid, the asteroid that indicates where we take up a cause – where we do what we have to do to win the battle is in the house of Pluto (8th) – the house of death. That coupled with secretive Scorpio the sign ruled by Pluto is on the ascendant. Death, intrigue, war, and fire is everywhere over the Bridge of Death at the moment of this crash.


There is no question that the energies where set to allow a situation of espionage to occur at the Bridge of Deaths that day. No one should classify a person looking for a war conspiracy as some off-the-wall theorist. What was that conspiracy – who was involved? Well for that, you have to buy the book! M.C.V.Egan @ Amazon


What do the charts of the victims tell us? A note here: it was not possible to get the birth times of each person but we do have the dates and places of birth. Drawing a composite chart (see Composite BOD insert 2) by combining all charts, gave me the actual chills. Yes, there is another stellium but this time it is the eighth house – the house of death. Pluto again played a key role with a conjunction to the Sun (life force), and the North Node, Juno and Neptune. 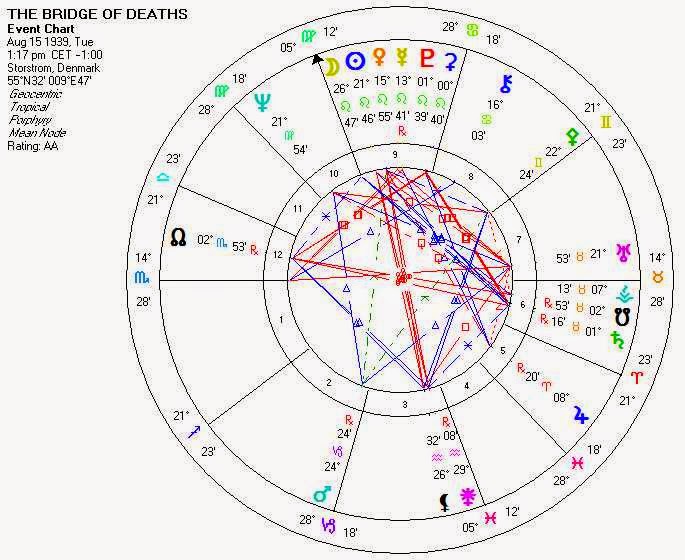 The North Node is an indicator of our current life soul’s desire – what lessons do we need to learn – where do we want to be when our sand runs out. The victim’s collective Node was in Cancer, the sign of motherhood, roots, home and country in the 8th house. Did they have a collective soul’s need to die for their countries?


Juno, the consort, the goddess of loyalty conjuncting Neptune, our most spiritual planet, the one that connects us to universal energies. This is an intense combination of spiritual devotion, spiritual energy as well as a large amount of victim energy. Victim? Yes, strong Neptunian influences intensify the victim emotion. People born with a great deal of Neptune energy in their charts often take on strong burdens in this lifetime. They often set themselves up to pay a great deal of karmic debt to people.


While each person on the plane had a different path, they all come together over that Bridge at a highly energized time to fulfil a soul’s lesson – to give themselves for their countries and for the right cause.


If you need more evidence of espionage and conspiracy then look at the biwheel of the moment of the crash and their composite charts. (See insert 3 BOD biwheel.) Remember when I said Mercury, the trickster and the communicator, was not in the ninth house stellium on the BOD wheel? Well, not any more. In the biwheel, Mercury and the Midheaven, the indicator of career, are together right on the chart of the event. The victims were carrying information and it was someone’s job to make sure that information disappeared. 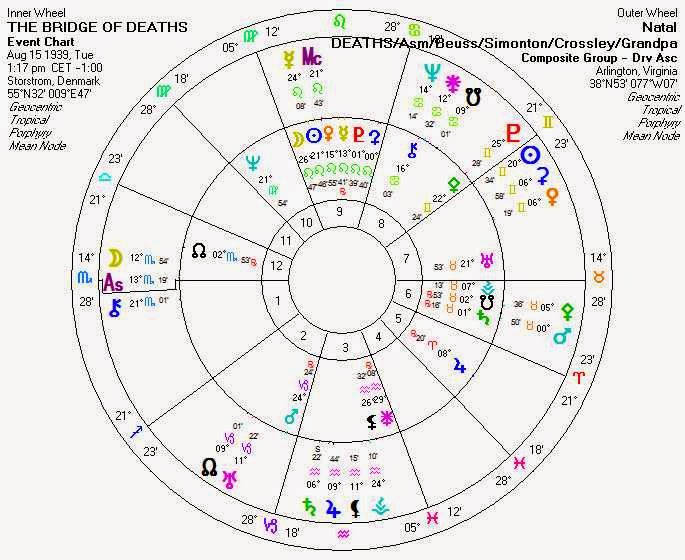 The victims Pluto is right on Pallas Athena in Gemini, ruled by Mercury, further proves the point that this was all about death that “needed” to happen to prevent information from reaching its endpoint. It was a matter of war. Finally, Mars and Saturn conjuncting in the sixth house, the house of health and the body, gives no doubt that violence was premeditated. There are no more a dangerous planetary placement that Saturn and Mars together. It is a bright arrow pointing to violence, as Mars is the god of war and Saturn the taskmaster. In addition, Saturn vibrates to the 10th house – which is the traditional house of government and authority.


What may never know all that lead to the crash over the Bridge of Deaths that day. However, astrology confirms that it was no accident.


Joan Porte is an evolutionary astrologer and author of “Signs of the Tines: The UltimateAstrological Cookbook.”


To learn about the astrology of your past lives and get a current life Astrological Birth Chart profile, visit her website joanporte.com.  Let Joan be your soul’s Astrological GPS – you should always know where you are going in life!


What should be on your Astrological Bucket List? Let Joan show you how to complete the most important bucket list you will ever have!


Twice a month her show “Astrological Cook” is on webtalkradio.com
Posted by M.C.V. EGAN at 10:45 AM