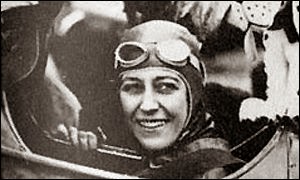 Amy Johnson and her love of aviation saw her become the heroine of the sky. Born on the 1st July 1903 in Yorkshire, England, she was introduced to flying as a hobby. On the 6th July 1929, she gained her pilot's licence. During that same year, she became the first woman to gain her ground engineer's 'C' licence.


With the help of her father and Lord Wakefield, she purchased her first aircraft, a second hand de havilland Gypsy Moth, nicknamed Jason. In May 1930, she achieved worldwide fame by becoming the first woman to fly solo from England to Australia, for which she received the Harmon Trophy and a CBE. Flying solo or with her husband Jim Mollison,  Amy went on to set numerous long distance records during the 1930's.


In 1940, Amy joined the Air Transport Auxiliary, flying planes for the war effort, delivering them to various bases around the UK. War planes were ferried between factories, maintenance units and front line squadrons. During the course of the war, 1245 men and women from various countries ferried 309,000 aircraft of 147 different types. They did so without any instrument flying instruction, without radios and were often at the mercy of the weather. It was also not unusual for them to be asked to fly planes they had never flown before.


On the 5th January 1941, whilst flying an Airspeed Oxford, Amy went off course on account of bad weather, and it was assumed at the time that due to running out of fuel, she bailed out, landing in the Thames Estuary. What was a routine flight, taking around ninety minutes, had actually taken her nearly four hours.


Amy had set off from Scotland, bound for RAF Kidlington, Oxford. She had taken off during bad weather, in conditions that might have deterred a more cautious pilot. Her Commanding Officer, Pauline Gower, defended Johnson's decision to fly that day, stating that the aviator would never do anything reckless. However, given Johnson's previous record of long distance flights and unnecessary risk taking, perhaps that particular day was simply one risk too far. I think it's fair to state that even the greatest among us can make a mistake. Amy Johnson was the nation's aviatrix, the Queen of the skies, and as such she had been placed upon a very high pedestal indeed. 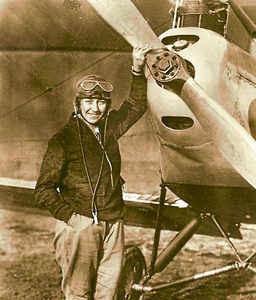 
When she ditched into the Thames estuary, she was about 100 miles off course. The weather – thick, freezing fog - made for extremely poor visibility and extreme conditions on the ground.


HMS Haslemere was docked nearby at the time and crew saw a parachute descending through low cloud. Shouts for help were heard from a woman who stated that she was Amy Johnson, and she was clearly seen by one sailor. Attempts to rescue her failed, and then a motorboat was launched, from which Lieutenant Commander Fletcher dived into the water in an attempt to reach her.


It was reported in the Western Daily Press on January 8th, 1941 that Fletcher reached a man in the water and was seen to be supporting him. However, the strong currents and high tide as


well as the extreme weather conditions meant that Fletcher lost his hold and he was himself rescued by his crew. By this time, there was no sign of Amy Johnson. She was last seen floating towards the stern of the Haslemere, and it was deduced that she was dragged below the icy waters, presumably killed by the ships propellers.


The Admiralty statement at the time even reported that two survivors from the aircraft were sighted in the water – a man and a woman. We will never know the truth until the Government release the official records.


However, there have been many rumours over whom this mystery male passenger might have been. Some have suggested he was Amy's lover, and they were fleeing the country. Why would they flee at such a time? Other reports have suggested that the passenger might have been a spy. One possible answer is that there was no passenger and it has already been stressed that Amy was flying solo. However, the pigskin overnight bag which she took with her could well have been mistaken for the head and shoulders of a person in the water.


Lieutenant Commander Fletcher was unconscious by the time he was dragged from the water. He was taken to hospital, but he died, never regaining consciousness. In May 1941, he was posthumously awarded the Albert Medal.


The first of two theories that exist are that Amy ran out of fuel. This seems likely as she only had enough fuel for around 3.75 hours and this was approximately the time she was in the air as the Ministry reported. So, she had no option but to bail out, and she might well have believed herself to be over land at the time.


The second theory, which was raised much later, is that she was the victim of friendly fire. Back in 1999, Tom Mitchell claimed he was ordered to fire on a plane that failed to give the required signal that it was a British plane. Tom was one of four gunners on duty at the Thames Estuary that day. When he read of Amy Johnson's probable death the following day, he realised that the plane he had believed to be an enemy plane, might have been Amy Johnson's. Officers at the time told the men to remain quiet about the incident.


Indeed, David Luff, an aviation historian has claimed in the past that she was fired upon by a naval convoy, and the incident hushed up by the Government to avoid damaging public morale.


However, the Royal Air Force Museum in Hendon, South London remain certain that Amy Johnson became lost in the clouds and ran out of fuel. More than likely, upon seeing barrage balloons, she would have thought she was over land when she prepared to bail. It was unfortunate that barrage balloons were being flown at the time by a convoy in the Thames. Had it been dry land, it would undoubtedly have been a very different situation.


The fact is that until the official records are released, nothing is certain. One thing that is certain, however, is that Amy Johnson was an icon and an aviation pioneer, bringing delight to the nation, and she remains Britain's most famous female aviator. She died doing her duty for King and country, and we will always remember her as we remember all those who died.
About The Author 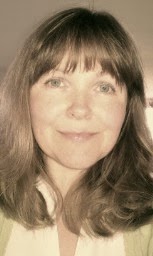 I'm Suzy Henderson, a writer who lives in Cumbria, England. I've been writing for several years and I'm presently in the midst of completing my début novel. History is my passion, particularly military history and I've chosen to focus upon the Second World War for the basis of my novel. There are so many untold stories from this period, always heroic and always evoking feelings of amazement and awe.

My inspiration firstly came from my family history and their connections to both World Wars. There after it arrived in the shaping of words written by many authors, in particular, Pat Barker, Hilary Mantel, Ernest Hemingway and Sebastian Faulks.

When I'm not writing I can be found spending time with my family and dogs, walking in the Lake District.
My links:
Blog:http://lowfellwritersplace.blogspot.co.uk/
Facebook:https://www.facebook.com/SuzyHendersonAuthor
Twitter: https://twitter.com/Suzy_Henderson
Posted by M.C.V. EGAN at 6:47 PM